In February, Aerialogy hosted our first ever student showcase, with seven routines and over twenty aerialists. Each act was themed, from flappers in all white to robots and mermaids. Performance workshops started in December and were held every Saturday, and all of our aerialists worked their butts off to put on the show of the season. We were the entertainment for The Bloomington Home Show, held at The Warehouse, where you could watch a fabulous aerial debut, and then buy a sink, if you felt so inclined.

We started with our junior flight sprites, the feathered kiddos, who performed a routine in an egg knot on the silk. These girls performed to “Jimmy’s Gang” by Parov Stelar with bright costumes (and fantastic ombré leggings, thanks to Etsy shop OmBeautiful), bright facial makeup, and big smiles.

Our next group were the robots, our intermediate flight sprites. They performed to Daft Punk’s “Harder, Better, Faster, Stronger.”

Following them, and the final of the kid routines, were the Ice Queens, our gals in blue, the senior flight sprites. They also had on a pair of ombré leggings, and they totally rocked them. They picked “Gooey (Gilligan Moss Remix)” by Glass Animals to perform to.

The first of our adult routines featured our mermaids, whose performance was slow and lovely, like watching aerialists moving through honey. Their fish scale leggings were just perfect for the visual they were creating, and their use of geometric shapes at the beginning totally completed their act. Their song was “Darkest (Dim)” by Tokimonsta.

Our intermediate adults were dressed head to toe as flappers, frilly skirts and all. They had absolutely fabulous choreography, which went perfectly with their song, one of our favorites, “It’s Oh So Quiet” by Björk.

The last student routine was our advanced adults, sparkling up The Warehouse with their glittery leotards. They performed to Lana Del Rey’s “Shades of Cool.”

The final, show stopping performance was our instructor routine, which included doubles and triples on one silk with our head instructors while two others performed their routine on the other silks. They had gorgeous, strip-y leotards handmade by the Etsy shop Harmony Threads, and they wore them well. They used “Delight” by Jamie Berry and “Rock it For Me” by Caravan Palace for their tunes.

Overall, it was a great performance, and all of our aerialists worked super hard to put on a beautiful show. We look forward to our fall showcase, which we’re sure will be just as lovely.

Thank you to everyone who put in the time and effort to make this happen, and to Darryl Smith photography for the beautiful photographs. 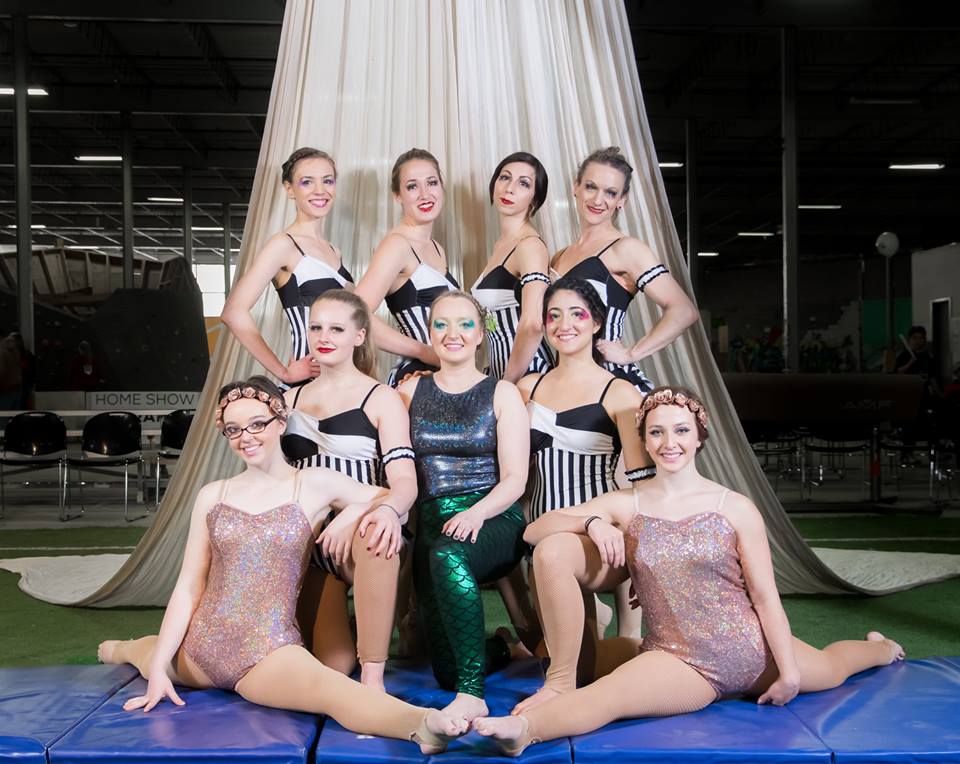 This site uses Akismet to reduce spam. Learn how your comment data is processed.

Subscribe to our e-newsletter to hear about events and sales before anyone else! We’ll never share your e-mail address or spam you.
Aerialogy